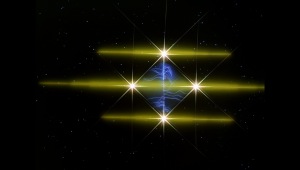 A fully energized vortex of a stargate (BR25: "Planet of the Slave Girls").

A stargate is a means of travel for smaller starships, such as Thunderfighters or other shuttle crafts, in use by the Earth Federation. It utilizes a space warp to shorten the distance between two gates.

William "Buck" Rogers travels through one for his first time during flight training with Colonel Wilma Deering (BR25: "Planet of the Slave Girls").

For newbies, like Buck Rogers, gate-crossing has some side effects like nausea, which should normally disappear after a few more crossings (BR25: "Planet of the Slave Girls").

The stargate is only visible when in use and consists of an equilateral diamond formed by four points linked by thin energy beams. Once "connected" these beams generate an energy field within its center, through which the ship enters.