Planet of the Slave Girls

"Planet of the Slave Girls" is comprised of both the third and fourth episodes from the 1st season of Buck Rogers in the 25th Century.

The majority of Earth's Defense Directorate pilot corps becomes incapacitated after consuming poisoned food discs. Capt. William "Buck" Rogers, Col. Wilma Deering, Maj. Duke Danton and Maj. Fields fly to the distant planet of the food's origin, Vistula, returning Governor Tabor Saroyan's son there to recover. While on the planet Vistula, they find that Kaleel has been building up a mass of brainwashed followers alongside a fleet of Scorpion fighters in secret, planning to use them against Earth's weakened defense forces in order to conquer the Earth. With Earth's defense force now heavily outnumbered 10-to-1, Danton decides that their only chance is to destroy the attack fleet while Rogers mounts a rescue for Deering, who has become trapped in Kaleel's mountain fortress.

His father is Tabor Saroyan, the governor of Vistula. I suppose I should notify him personally.
Just how serious is his condition?
It's his nerves controlling his voluntary muscles and motor coordination. They're deteriorating, just like all the others.
Others?
Yes. The Computer Council has ordered that a definitive statement to the general public not be made just yet. But so far here in New Chicago, 25,000 case have been reported.
When did all this start?
Three days ago, while you and Buck were gone. And another thing: this disease, or whatever it is, has cropped up in other cities on Earth, but here in New Chicago it's much, much worse... You see, what the Computer Council is trying to keep secret is its effect on our defense squadrons, for they've been hardest hit of all. 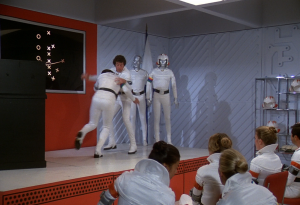 So, you must ready yourselves, my friends! Your moment is at hand! No longer shall you live in a Sea of Stone, while others reap the benefits of our world's lush glory! No longer shall you work to feed the people of distant planets while your own sons and daughters go hungry! Soon you will descend upon the Earth like meteors, like fire, and consume them with the flames of your righteous anger. The only ones who can stop us are those enemies among us. Those who are weak and faithless. Those who do not believe, those who attack me out of fear and jealousy. These are our enemies. Every moment you tolerate their presence among us is a moment lost for you, and your children, and your children's children!

— Kaleel fires up his crowd of sycophantic nomads in the Sea of Stone, Buck Rogers in the 25th Century's "Planet of the Slave Girls" 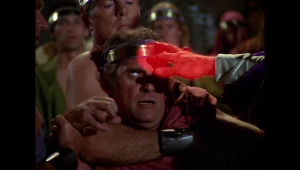 Kaleel to Leila's husband: "If your heart is good and true, you shall live."

Saroyan's son has arrived. The governor has prepared a banquet for the co-pilots who escorted him here.
The fool has been so helpful to us, he deserves to have a good time. Just so he remains totally ignorant of what's happening right under his nose.
He might not. Dr. Huer survived the attempt on his life.
[Kaleel turns heel, surprised] What?
It could very well be he knows the poisoned food comes from Vistula and he's sent these people here as spies.
Well, if they're staying at the Statehouse, we needn't worry. Should they stray too near the fire, we'll simply see that it... engulfs them.

I don't understand. Where have all of our guests gone? Colonel Deering, Major Fields, Major Danton, even that boorish Captain Rogers, where have they gone?
You really don't know what's going on here, do you?
Hmm?
I've tried to tell you for years: about Kaleel, the way he exploits the nomads, how he makes them hate the very sound of your name.
[holds up a finger] Now I have a job to do. And I've always tried to do the best I could.
We've been through all this before, father. You never listen! Not really. Oh, Julio you listen to. Julio, whose first loyalty is to Kaleel. But never to me. You never listen to your own son, so finally I gave up trying to make you hear.

— Toban Saroyan and his son, Regis Saroyan, rehash an old argument regarding the conditions on Vistula, Buck Rogers in the 25th Century's "Planet of the Slave Girls"

What will your friend do when he returns to Earth, Captain Rogers? Let's see. You've seen the fleet I've been slowly, patiently building up, and you've no doubt concluded that my plan is to weaken Earth's defense squadrons by poisoning its members, so the planet can be conquered with ease.
Murder seems to be second nature to you. Why didn't you wipe us all out so you can walk into power?
[chuckles] Mass death would've caused much alarm, attracted too much attention. Dr. Huer would have suspected foul play immediately. This way, the gravity of the situation crept up on him. By the time he had an inkling of what was truly happening, it was too late.
That's not the reason. The truth is, you get your kicks out of turning people who should logically hate you into mindless zombies who follow you around shouting your name.

— Kaleel and William "Buck" Rogers discuss the dastardly nature of Kaleel's plan, Buck Rogers in the 25th Century's "Planet of the Slave Girls"

The time is now! The time has come for you to sail into battle and be victorious! Earth is about to fall victim to its own greed. Soon, you shall meet those who have exploited you for so long, and you shall defeat them! No longer shall you live in caverns and canyons. All Earth's wealth is yours for the taking! Having suffered so long at Saroyan's hand, you deserve the Earth!
Kaleel joins the body of the congregation, with Galen and Stella Warden behind him.
[gestures to Galen] Listen to Galen! Do what he says and don't be afraid. Only the weak are afraid. And as long as I am with you, as long as the Kiss of God is on your heads, you shall prevail!

— Kaleel riles up his congregation before launching his attack on Earth, Buck Rogers in the 25th Century's "Planet of the Slave Girls" 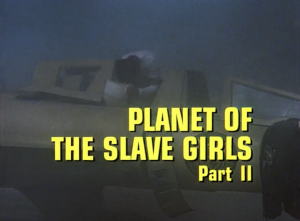 "Planet of the Slave Girls, Part II" title card on the syndicated version of the episode.

If you call that interference, there's something wrong with your Funk & Wagnalls.
I don't know what you mean by that, but how'd you like to repeat that in the flight hangar?
I'd love to.

So you're Buck Rogers, huh?
Since the day I was born.
Danton addresses Deering, who is standing next to Rogers.
I beg your pardon, Colonel, but, uh, he's no captain.
That's not quite true, Duke. While Buck has formally declined to join the Defense Directorate, he does help us out on occasion.
Danton addresses Rogers.
"Declined to join"? Now, why would a big, brave hotshot like yourself do something like that?
[Rogers replies matter-of-factly] I didn't think I'd like the company.

Well, we'd better get on our survival gear on.
Yeah. Otherwise, we'll look like a couple of brown-and-serve rolls at sunset.

— Duke Danton and William "Buck" Rogers after being forced down into the Sea of Stone by a power leech, (BR25: "Planet of the Slave Girls")

This thing itches like crazy.
Take it off if you don't mind getting third-degree sunburn.
You probably feel right at home wearing yours.
That's right.
I've seen pictures of people and how they dressed in your time.
Yeah, well, your half-baked 25th-century historians got things so messed up, they don't know the difference between a cowboy and a traffic cop.

Hey, nice double-teaming over there, whoever you are.
Gordon's the name. Thanks.
Have we met, Gordon?
I don't think so, Captain. We're from different times.

— Captain William Rogers and Brigadier Gordon during the Battle of Vistula, (BR25: "Planet of the Slave Girls")

Gordon, where'd you learn to shoot like that?
I've been doing that sort of thing since before you were born, Captain.
[surprised] You think so, huh?
Young man, I know so.

— Captain William Rogers and Brigadier Gordon during the Battle of Vistula, (BR25: "Planet of the Slave Girls")

Careful. Careful. The filament you're soldering is the precise weight and thickness as the one you're replacing. Be careful, Twiki. It was very difficult to make.
Get off my back!
I'm not on your back, Twiki. And please concentrate on what you're doing. If anything, I'm on your front, and I can't get off without your help. Where have you been coming up with such expressions?
My good buddy, Buck.
I should have known. It's hard to believe that Captain Rogers learned to speak on the same planet as the rest of us.

— Dr. Theopolis and Twiki as they repair Carl, (BR25: "Planet of the Slave Girls")

We're next, Twiki. [the launch channel's lights run towards them] Here we go.
[hits the throttle] Geronimo!

— Dr. Theopolis and Twiki take their first flight into a Thunderfighter (BR25: "Planet of the Slave Girls")

[spotting an enemy fighter in his sights] Eat lead, sucker!
Lead? What lead? Twiki, what are you talking about?

— Twiki and Dr. Theopolis in a firefight during the Battle of Vistula, (BR25: "Planet of the Slave Girls")

You ready?
Mm-hmm.
Deering flips Rogers over her shoulder
How's that?
Fine. Just fine.
Not too hard?
No. Oh, no.
Maybe I shouldn't have asked you to teach me judo until you'd fully recover from teaching 20th-century battle strategy.

— Carl attempts to attract attention after Stella Warden plants an explosive device inside of Carl, (BR25: "Planet of the Slave Girls")

Hey, creep, I bet you wear that mask 'cause your face looks like it's been through a meteor shower!

— William "Buck" Rogers as he and Duke Danton fight off nomads following their crash-landing in the Sea of Stone, (BR25: "Planet of the Slave Girls")

If you're listening, Kaleel, the three of us would just like to say we didn't care much for the sauna.
That's Rogers!
Ah, Stella. You're so beautiful when you're angry.

— William "Buck" Rogers after escaping from the pit, (BR25: "Planet of the Slave Girls")