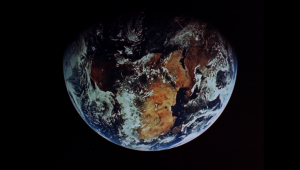 Earth is the Terran homeworld.

In 2491 CE, William "Buck" Rogers discovers that Earth has changed drastically due to a cataclysmic event known as World War III, which 25th century Terrans refer to as the Holocaust (BR25: Film, "Awakening").

During the 20th century, the nations of Earth—notably the United States of America—began their forays into space exploration. The last of these explorations is the Ranger 3 mission, piloted by Captain William "Buck" Rogers, in the year 1987 CE. Following the failure of his mission, Earth's warring powers succumb into a global conflict some months after Rogers' departure. Known as World War III, this results in a holocaust that gripped the Earth and nearly rendered the planet virtually inhabitable (BR25: Film, "Awakening", "Testimony of a Traitor").

Over the span of five centuries, Earth begins the long process of rebuilding (BR25: Film, "Awakening"). Sometime during this time, various groups of humans spread out across the galaxy, resulting in numerous "lost colonies" that Searcher is tasked with searching for and reestablishing ties to in 2492 CE (BR25: "Time of the Hawk") following establishment of peace between Earth and the Draconian Empire (BR25: "Flight of the War Witch, Part II").

In the 25th century, Earth is mostly replete with unsustainable land, and so Earth's civilized population is contained in major cities, chief of them being New Chicago, the de facto capital city of Earth. Other cities in North America exist, including New Phoenix, City by the Sea (New Orleans), etc. Despite the vast recovery efforts, including the ability of feasible space exploration, a majority of Earth's surface still remains mainly unexplored, with some areas irradiated and others replete with ruins. Survivors of the Holocaust — mutants — roam the surface as nomads, in places referred to by its forthright and apt name of "Anarchia" (BR25: Film, "Awakening").

Earth was one of the planets that had not been yet subjugated under the Draconian Empire, despite Earth's reliance on foodstuffs from planets outside of Sol (BR25: Film, "Awakening", "Planet of the Slave Girls"). This is likely due to the presence of an impervious planetary defense shield implemented and overseen by the Earth Defense Directorate (BR25: Film, "Awakening").

Additionally, the humans on Earth are governed by a Computer Council, initially created by humans as a result of the errors of their destructive past (BR25: Film, "Awakening"). Various drone ambuquads also aid in the maintenance and reconstruction efforts. Terrans also enjoy vast reserves of clean power from contraterrene (antimatter) sources, located in the wastes away from the city proper (BR25: "The Plot to Kill a City").