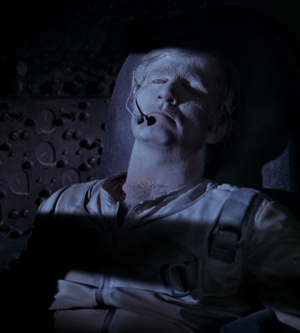 The man lives, I'm not sure why.
You're not sure why? Is this a puzzle for me to decipher?
The puzzle is for me to decipher. The ship is antiquated... unlike anything I've seen in the star system, or outside of history books for that matter.
Kane, please.
He was frozen by a combination of gasses: oxygen, cryogen, ozone, methalon. Almost a perfect balance.
Well, these are techniques used throughout the galaxy for terminal illness and disease.
Yes, today. However, there is another matter: the man's ship.
Kane, you have one more minute.
His instrumentation was stopped, frozen solid in the year 1987.

— Kane and Ardala on their visitor, Buck Rogers in the 25th Century's "Awakening"

Its use on Earth predates the events of 1987 CE's World War III, and two persons from the 20th century are known to have survived into the 25th century due to cryogenics: William "Buck" Rogers and Hieronymus Fox (BR25: "Awakening", "Cosmic Whiz Kid").

For William "Buck" Rogers, the cryogenic process is an accidental one, caused by a malfunction of his life support system aboard Ranger 3 during NASA's last deep space probe (BR25: "Awakening"). In Fox's case, the child prodigy invented and tested a prototype cryo tube on his person prior to WWIII. Both this chamber and its subject are taken from Earth by unnamed extraterrestrials and, throughout the next five centuries, invariably ends up on Genesia (BR25: "Cosmic Whiz Kid").

In the 25th century, the developed worlds of the galaxy, including the Draconians, utilize suspended animation to preserve life for a variety of reasons, such as the preservation of an individual requiring medical attention (BR25: "Awakening").

Following the interception of William "Buck" Rogers aboard Ranger 3 in 2491 CE, Kane informs Princess Ardala that Rogers' preservation—and subsequent revival by Draconian life sciences—is nothing short of miraculous. Kane surmises that the perfect balance of the four gasses of oxygen, cryogen, ozone and methalon were responsible for preserving Rogers over the many centuries (BR25: "Awakening").

The technology is in other arenas as well, including Velis' escape capsule (BR25: "The Golden Man").