For 500 years, Captain William 'Buck' Rogers has been miraculously preserved, frozen by temperatures beyond imagination. Now, in Earth year 2491, he is rudely awakened by the sinister forces of the Draconian realm.

In the year 1987, the United States launched the last of National Aeronautics and Space Administration's deep space probes prior to World War III later that year. On board Ranger 3 is a lone astronaut, Captain William "Buck" Rogers. However, the spaceship has moved from its planned orbit, and instead of being gone a few months, it returns to Earth 504 years later. Captain Rogers is placed in a deep hibernation by forces beyond his control, and remains frozen at the controls until the year 2491. The ancient lost ship is found perfectly preserved by fighter craft of the Draconian Empire, who fire on Ranger 3, then tow it to their alien flagship, Draconia.

After being revived, Rogers meets Princess Ardala and her ship's commander, Kane. Although Ardala is supposed to be on her way to Earth on a peace mission, in reality she is preparing to invade the planet, one that has long been the enemy of her race. They use Rogers, who still thinks that his entire alien encounter is nothing but a dream, by sending him ahead to Earth to discover the location of a safe corridor through Earth's defenses. The ploy works because of a microtransmitter aboard Rogers's ship that sends back messages with the corridor's location.

Rogers finally realizes that he actually has traveled into the future after meeting Earth Defense Directorate's Col. Wilma Deering and Dr. Elias Huer, but the Computer Council considers him to be a traitor when the transmitter is found on board Ranger 3. In an attempt to clear himself of a death sentence and execution, Rogers returns to Draconia and pretends to join Ardala and her army, in the process learning of the plans to invade Earth. Rogers decides that he must stop the attack, no matter what the odds. As the man from the 20th century prepares to make his move, he is held at gunpoint by Twiki and Dr. Theopolis. Rogers must prove his innocence to the two mechanoids before the attack can be launched.

One of the king's star fortresses on its way to Earth on a peace mission.
On its way to Earth? You mean you guys aren't... from... You mean, we're not... we're not on Earth? I'm definitely gonna need that aspirin.

— Princess Ardala to William "Buck" Rogers after the Draconians revive him, Buck Rogers in the 25th Century's "Awakening"

Just wait until the guys at the Cape hear this: Buck Rogers sets down in the middle of Red Square.

— William "Buck" Rogers believing that he has been captured by a Russian patrol, Buck Rogers in the 25th Century's "Awakening"

At first I felt he was guilty and then...
You're being subjective in your evaluation of Buck Rogers. I, on the other hand, support him for very practical reasons.
[Dr. Elias Huer pipes in] And what are they?
[Dr. Theopolis replies] I'm convinced of one thing: our friend Captain Rogers has indeed met the Princess Ardala and has been aboard the Draconian flagship. His descriptions are too precise to be the guesswork of a pirate.

— Col. Wilma Deering and Dr. Theopolis are presented with the microtransmitter recovered from Ranger 3, Buck Rogers in the 25th Century's "Awakening"

But no, if I'd met so dashing a young captain, I'm sure I would've remembered vividly. [to Rogers] I don't believe we've had the pleasure.
I think you're mistaken, Princess. [goes to kiss her hand, kisses it, then offers] I never forget a knuckle.

— Princess Ardala to William "Buck" Rogers after being introduced by Wilma Deering, Buck Rogers in the 25th Century's "Awakening"

Citizens of the Inner City, may I have your attention, please? At this profound moment in our history, we see hovering in the skies above us an alien vessel. Military spacecraft, a ship of war. This war machine comes to us stripped of all weaponry, completely unharmed, a shining symbol of peace. Lasting peace and great good will between the people of Earth and the Draconian Realm. [audience applauds, subsiding into] And we welcome the Draconian Trade Delegation under the leadership of her Royal Highness, Crown Princess of the Realm, Ardala.

Those are warships out there. That means the treaty is a hoax, but we can do one last service for our country: we can deal with Captain Rogers.

You always use that sense of humor of yours to avoid feeling pain. Doesn't always help, does it?
I think you know the answer to that.
Yes, I would imagine you wake up every night with some sort of pain, and you probably always will. But there's nothing any of us can do about it. There is something, however, that you can do about it. 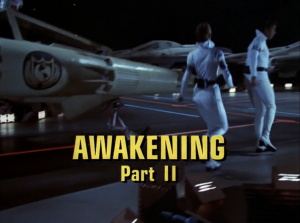 "Awakening, Part II" title card on the syndicated version of the episode.

I would suggest thoroughly searching her ship before you allow it inside your defense shield.
Wrather an insulting way to begin an alliance based on good faith.
Good faith is for bureaucrats and what gets you a city with a lid on it. I'd go up there armed to the teeth, full squadrons. Otherwise, you'll be sitting ducks.
[bristling] For a man whose expertise is allegedly five centuries old, you seem quite opinionated.
You're right. It's none of my business how you blow up your world. My generation didn't know what they were doing either.

— William "Buck" Rogers and Col. Wilma Deering on the impending arrival of Draconia, Buck Rogers in the 25th Century's "Awakening"

No, no. I... I don't like that plan. It worries me.
[annoyed] Why?
[facetious] Well, you see, I'm scheduled for termination. If I miss it, I might get into a lot of trouble.
Buck, you are impossible. I'm offering you your life, and you're giving me practical jokes?
Well, see, that's the point: are you offering me termination of my termination, or are you just postponing it?
If you can prove that your story is true...
Let's go.

Well now, what an attractive man you are, Captain Buck Rogers.
Now look, I've been waiting 24 hours to find out where I am, who I am, who you are. Could I have some answers?
Certainly Buck, that's why I'm here... to answer your questions.
Great. Let's have it.
Well, you're Captain Buck Rogers, and according to your ship's log, you left Earth in 1987.
That much I know. Tell me what I don't know.
Well, if preliminary data holds up, it appears you have returned to Earth 504 years later. [Rogers is stunned to silence] You are now in the 25th century. [Theopolis notices Rogers' condition as Twiki returns with a liquid refreshment for Rogers] Buck? Are you all right, Buck? Did you hear me? Buck?
[still stunned] I think I will have that drink now.
[Rogers takes the drink, and Twiki offers his first human-understandable statement] L'chaim.

We owe you a great deal more than an apology, Buck. Especially me. I confess, I thought the Princess had you beguiled.
Well, I will say she had the nicest set of... horns... at the ball.
Yes, it was an attractive hat.

[looking out the window while smushing Rogers' face] Bidi-bidi-bidi. Uh-oh.
[readjusts Twiki on his lap] Eyes forward. You'll get star-sick.
Bidi-bidi-bidi. Buck, you're my kind of guy.

— Twiki and William "Buck" Rogers after seeing Ardala's launch on an escape vector, Buck Rogers in the 25th Century's "Awakening"

Look, I got attached to a lot of places, a lot of people, a lot of good times in another century, and it was all torn away from me. Now maybe there's no way back to those things I left behind, and then again, maybe there is. What I'm trying to tell you is, I'm afraid that if I put down roots here, I might have to go through it all again. Thanks, but no thanks.

— Twiki as he and William "Buck" Rogers run to Col. Wilma Deering's Thunderfighter, Buck Rogers in the 25th Century's "Awakening"