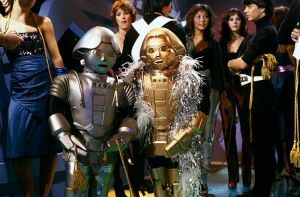 These Quads are not programmed by man. They've been programmed by one another over the generations. You see, the mistakes that we have made in areas, well, like our environment, have been entirely turned over to them. And they've saved the Earth from certain doom. Little by little, bringing us back so that we will not have to depend entirely on other planets for our food and water. The Quads are not human, but... you can hurt their feelings. It's this sensitivity that separates them from mere machines.

An ambuquad (or quad) is an automaton outfitted with artificial intelligence.

Ambuquads are designed for numerous purposes, and in different configurations and styles. Originally created and programmed by humans, they became self-aware and began creating others of their kind (BR25: Film, "Awakening").

There are two types of quads, those relying on other quads for transport (in the case of Dr. Theopolis and the Computer Council), and quads with locomotive capabilities (i.e. Twiki and Tina who serve as servitors).

Various administrative quads[1] comprise the Computer Council, who are tasked with variety of tasks from distribution of food to various other tasks that support cities such as New Chicago. They also oversee and dispense justice (BR25: Film, "Awakening").

Administrative quads are employed elsewhere in the galaxy overseeing other planet's affairs, like Mr. Devronin, who is carried by a human (BR25: "Planet of the Amazon Women").

A variety of servitor quads[1] (also referred to as drones) perform various services, and are designed thusly. Some take an animalistic form, others take a humanoid form.

A "kid size" humanoid-style ambuquad with pincers is in use in the 25th century, apparently programmed with masculine and feminine personalities. One such, TWKE-4 (a.k.a. "Twiki"), was assigned to carry Dr. Theopolis, a member of the Computer Council (BR25: "Awakening"). Another, Tina, is a waiter aboard the cruise ship Lyran Queen (BR25: "Cruise Ship to the Stars"). Typically, these ambuquads communicate in either English or in their machine language. To human ears, this ambuquad machine language sounds like "bidi-bidi-bidi" when spoken by Twiki, for instance, but differs from "boodi-boodi-boodi" by Tina, likely emphasizing the different stereotypical "gender roles" programmed in the machines.