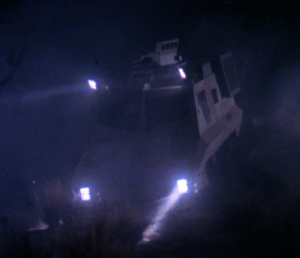 Various landcraft[1] are used by various organizations in the 25th century. 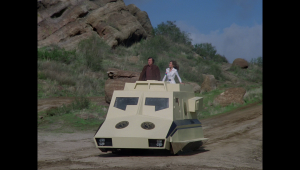 Later, an unarmed transport variant ferries Rogers, Deering, Twiki, Theopolis, Dr. Elias Huer and a few other officers to the landing of a sphere dispatched by the Pendarans outside the city in an rocky, barren area of Anarchia[2] (BR25: "Flight of the War Witch"). 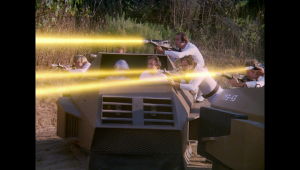 An open cab type landcraft is also used by Defense Directorate personnel for the transport of troops, and two such crafts were used in the pursuit of Rogers (BR25: "Escape from Wedded Bliss").

In pursuit of Rogers, Princess Ardala's forces are somehow able to secret a landcraft of their own, and use it to pursue Rogers who leaves the city and heads into the wilderness of Anarchia (BR25: "Escape from Wedded Bliss").

The landcrafts used by the Draconians and Earth Directorate are reuses of the landram from Battlestar Galactica, provided by Thiokol, using the "Imp" chassis and dressed with different bodies by production as needed.