Flight of the War Witch

"Flight of the War Witch" is the twenty-third and twenty-fourth episodes of the 1st season of Buck Rogers in the 25th Century.

William "Buck" Rogers enters a space warp that sends him into an alternate universe where he encounters the planet Pendar, a peaceful world under attack by a "war witch" named Zarina. Matters become further complicated with the arrival of Princess Ardala on the Draconia, who has brought along Wilma and Dr. Elias Huer during a temporary truce between her world and Earth. Buck enlists the aid of both Earth and Draconian forces to save Pendar from the attack of a huge Zaad battlecruiser.

Buck journeys through a space warp to another universe. There he discovers the planet Pendar, a peaceful world now threatened with the extinction by the sinister war witch, Zarina (Newmar). The Pendarans enlist the help of both Buck and Princess Ardala. The Draconians have followed Buck through the warp with Wilma and Dr. Huer aboard the Draconia. An unsteady alliance between the terrans and Draconians is formed as Buck prepares to lead a combined fleet of Starfighters and Marauders against the giant Zaad battlecruiser. 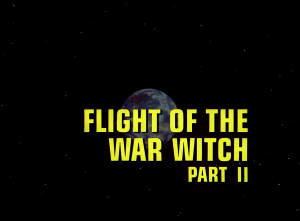 "Flight of the War Witch, Part II" title card on the syndicated version of the episode.