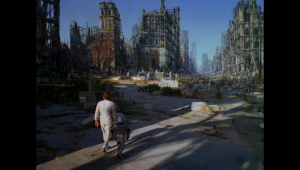 Matter of fact, I kinda like it out here. It's a bit primitive, but then it is the South Side of Chicago.

— William "Buck" Rogers to Wilma Deering after the mutants were warded off by Earth Defense Directorate soldiers, (BR25: Film, "Awakening")

Anarchia are the wastes of Earth following World War III, littered with ruins and mutated humans.

Even into the 25th century, may mutants live outside of the Inner Cities, scavenging from the remains and stealing any new technology—including precious metals, such as gold—they may come across to sell on the black market. Even with advanced technologies at their disposal, the Earth Defense Directorate avoids entering Anarchia at night.

A curious William "Buck" Rogers, much to the chagrin of Dr. Theopolis, is told that information on the path to Anarchia is classified. After further discussion, a reluctant Theopolis surmises that Rogers would find a way outside of the city without their help, but would certainly not survive going out alone. Thus, to Twiki's consternation, Theopolis makes the decision that they will guide Rogers' exploration of Anarchia.

Theopolis decides that they shall embark at daybreak, and they leave for Anarchia the day after Rogers' tour of New Chicago by Col. Wilma Deering.

As night falls, Rogers comes across the remains of State Street and, subsequently, his family's gravestone of 500 years prior. During this discovery, they are besieged by a horde of mutants, who are dispatched by Defense Directorate forces lead by Deering (BR25: Film, "Awakening").