Uniforms of the Defense Directorate 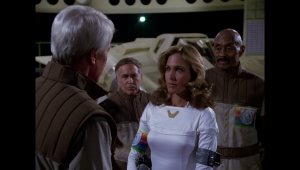 A variety of uniforms of the Earth Defense Directorate are worn by officers and representatives, either as day uniforms or during ceremonial functions. 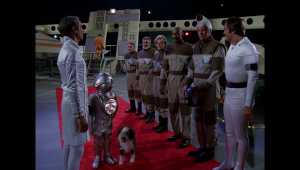 The Earth Space Marines, such as those of the Fighting 69th or Lieutenant Cornell Traeger, wear a comfortable, loose-fitting, slate gray combat uniform jumpsuit with brown ribbing details at the yoke (ending at the arm eyelet seam), as well as around the elbow, cuff, and knee, and a thin pleated "belt" around the waist. The torso closure is velcro, with the "loop" side to the wearer's right, and the Earth Directorate logo atop a rainbow background patch affixed over the left pocket, while the pants feature slanted, open pockets at the thigh (BR25: "Return of the Fighting 69th", "Buck's Duel to the Death").

Major Noah Cooper is known to wear a satin dark green ascot under his uniform (BR25: "Return of the Fighting 69th").

This style of uniform is worn with a blue-gray helmet with black "lighting" stripes at the top sides of the dome, along with a shield and laurel leaves badge of the Earth Directorate logo affixed to the helmet's forehead (BR25: "Return of the Fighting 69th", "Buck's Duel to the Death"). 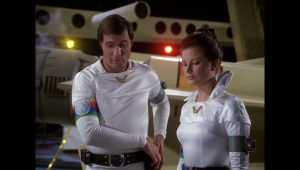 Capt. William "Buck" Rogers and Maj. Marla Landers are given specialized equipment by Twiki and Dr. Theopolis before their departure for Sinaloa (BR25: "Vegas in Space").

The combat uniform of the Defense Directorate in 2491 CE is a tight-fitting white ensemble noted for a tunic with a distinctive one-inch flap-edged yoke with popped collar, distinctive armbands at the bicep, and distinctive white yet striped leggings with fitted boots. The "stripe" fabric pattern is also distinctive on the arms of the tunic, while the main body is fairly solid spandex construction, with bust darts and princess seams on the women's ensemble (BR25: "Vegas in Space").

The tunic itself is unique in construction, whose distinctive one-inch edging flap ran between the breastplate and throat, straight around the front and back of the body; the popped collar effect could either be popped or seated in a recess around the neck. For pilots, a gold wing pin rests at the center of said yoke (BR25: Film, "Awakening"), while pilots with silver eagles wear both (BR25: "Return of the Fighting 69th").

On the wearer's right bicep a rainbow-colored armband was worn, atop which a logo of the Earth Directorate rests as a separate patch element. Contrasting to the wearer's left bicep was a smaller slate gray armband featuring a box device, which may or may not be worn by certain personnel (BR25: Film, "Awakening", "Planet of the Slave Girls").

A black belt with silver buckle, featuring a separate sculpted logo of the Earth Directorate in royal blue, is worn at the waist. A gray pistol holster with a separate electronic box may be worn on this belt (BR25: Film, "Awakening", "Planet of the Slave Girls", "Return of the Fighting 69th"), in addition to an equipment pouch that can be located at the back or side (BR25: Film, "Awakening", "Vegas in Space").

The uniforms are typically worn with either a white or cream helmet by Directorate forces when either piloting a craft, or performing military duties in the field (BR25: Film, "Awakening", "Return of the Fighting 69th", "Buck's Duel to the Death"). 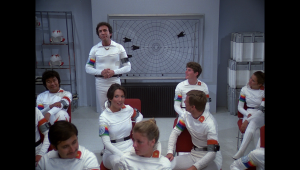 Cadets wear a variant of this uniform with an orange arm band (in either lieu of or above the gray armband with box), and an orange collar "bullet" tab (with a U.S. Navy command ashore pin) on the cadet's left collar flap (BR25: "Planet of the Slave Girls").

Women of the Defense Directorate wear an alternate two-piece jacket and legging style ensemble. The jacket features a zip-front with pointed, fold-over collar featuring a stylized U.S. flag patch with the longest side laying atop the outer bicep length-wise, along with short zippers running length-wise at topmost cuff of each sleeve (BR25: "Awakening", "Planet of the Slave Girls", "Vegas in Space", "Return of the Fighting 69th"). Officers, like Marla Landers, wear a baby-blue turtleneck under the jacket (BR25: "Vegas in Space").

Pants worn with this day uniform feature rear pockets over each buttock (BR25: "Planet of the Slave Girls").

For formal occasions, a dress uniform is worn by members of the Defense Directorate, among them Dr. Elias Huer. The standard dress uniform consists of white leggings, shared from the Combat Uniform, with a black double-breasted tunic with gold decorative trim. Most officers wear a single gold stripe that lays mid-way at the wrist, above which (facing outward at the forearm) is the symbol of the Earth Directorate embroidered in gold; the only exceptions to this being Dr. Huer and Wilma Deering, who wears 3 rank stripes to denote their leadership status (BR25: Film, "Awakening", "Escape from Wedded Bliss").

Those who are pilots wear the gold wing pin either just under the neck opening of the folded-over mandarin collar or, in the case of Huer, on a baldric. Huer's baldric is unique in that it is a wine color, appearing either dark royal purple, plum or maroon red depending on lighting, and festooned with various ribbon decorations — the first and topmost of them being the gold wing — and worn across the left shoulder and crossing across the chest towards the wearer's right hip (BR25: Film, "Awakening", "Escape from Wedded Bliss"). Others may also wear a white baldric with award ribbons (BR25: "Escape from Wedded Bliss").

As to specific ranks, these are not typically denoted on the uniform, with the exception of one case where Commissioner Bergstrom and some of his military aides de camp wear multiple U.S. Military Intelligence compass rose pins at both sides of the folded collar (BR25: "Testimony of a Traitor").

In the hangar bays of New Chicago, maintenance personnel wear orange jumpsuits with gray striping at the outer arms and legs, with black gauntlet gloves and black boots. Maintenace personnel may often wear a hard hat with or without an attached head lamp (BR25: "Return of the Fighting 69th").

This costume is a reuse of the launch bay deckhand costume from the original Battlestar Galactica, with the Galactica emblem removed from the chest.

While shot down on the planet Vistula, Major Duke Danton and Capt. William "Buck" Rogers abandon their shot-down Thunderfighter, wearing a golden two-piece suit with hoodie. Underneath this is a baby blue button-down shirt, and the ensemble typically consists of a modular black backpack with brown work boots (BR25: "Planet of the Slave Girls").