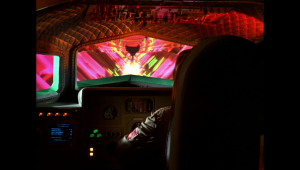 A launch channel is a launch accelerator channel for smaller craft installed on a larger base or within a capital ship, allowing the ship to launch at rapid speeds over a shorter distance without using its own engines.

Draconia's launch channels are irregular pentagon shaped tubes, with the angular point on the underside of the ship.

A drugged William "Buck" Rogers is wowed by the light show as Ranger 3 launches from Draconia.