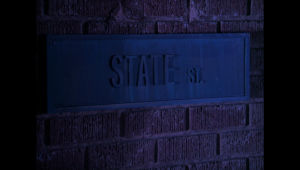 I don't mean to impugn your strategy Buck, but standing in the middle of the street is stupid... under the circumstances.

— Dr. Theopolis to William "Buck" Rogers upon discovering the State St. signage, and attempting to get his bearings, (BR25: Film, "Awakening")

State Street is the main street of Chicago, Illinois as of 1987 CE, and a large south-north street in Chicago's south suburbs. Its intersection with Madison Street marked the base point for Chicago's address system since 1909 CE.

During his explorations of Anarchia, William "Buck" Rogers finds this street via a sign on a decrepit corner building. From there, Rogers is able to find the cemetery where his family are interred following the events of World War III (BR25: Film, "Awakening").