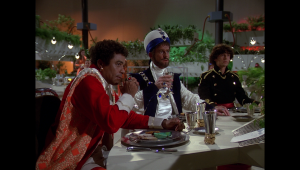 Julio, Governor Tabor Saroyan, and Regis Saroyan during a banquet with food sourced from Dionysin (BR25: "Planet of the Slave Girls").

It isn't every day that I have a full meal brought in here from... [to Julio] What is the name of that place?
Dionysin.
[Rogers becomes curious] None of this food is from here?
Of course not. I mean, you can imagine how quickly one tires of soy products. Oh, no. I have all my food brought in. All of it.
An expense budgeted into the governor's salary.

— Governor Tabor Saroyan, Julio, and Capt. William "Buck" Rogers during the banquet after Regis Saroyan's return to Vistula, Buck Rogers in the 25th Century's "Planet of the Slave Girls"

Dionysin is one of the many places where Governor Tabor Saroyan acquires various foods of meat and other victuals during his governance of Vistula.

The Defense Directorate honor guard of Col. Wilma Deering, Maj. Duke Danton, Maj. Fields, and Capt. William "Buck" Rogers are provided food from Dionysin in a banquet following the return of Regis Saroyan to Vistula. Julio, Governor Tabor Saroyan's aide de camp, notes that the expense for this food is budgeted into the governor's salary (BR25: "Planet of the Slave Girls").

The place is perhaps named after the Greek god Dionysus. Dionysus, also known as Bacchus in the Roman pantheon, is known as the god of wine, winemaking, fertility, ritual madness, theater, and religious ecstasy—al things relating to opulence, a pursuit cultivated and pursued by Governor Tabor Saroyan.