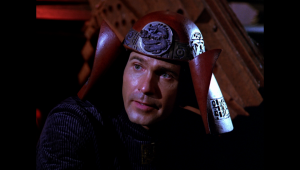 William "Buck" Rogers in a Draconian soldier disguise, with the logo of the Draconian Empire (BR25: Film, "Awakening").

The Draconian Empire is an intergalactic force of considerable power in 2491 CE, overseeing the Draconian Realm itself consisting of three-quarters of the universe (BR25: Film, "Awakening").

Overseen by Emperor Draco, the Draconian Empire engaged in a Cold War with the Earth Defense Directorate, often using subterfuge against the EDD's forces.

One such act of subterfuge is manufacturing pirate attacks using Hatchet fighters against Earth's shipments of food, in an attempt to convince Earth's Dr. Elias Huer and the Computer Council to work with the Draconians. To interface with the EDD, Draco sends his daughter, Princess Ardala and his aide de camp, Kane, aboard the flagship Draconia. In midst of these unscrupulous proceedings, a 20th century astronaut, William "Buck" Rogers, is intercepted and revived by the Draconians and sent back to Earth.

Despite suspicion that Rogers was a Draconian spy, Rogers is able to undermine the Draconian Empire's plan by exploiting Ardala's interest in his person, enabling the destruction of Draconia in the process (BR25: "Awakening").