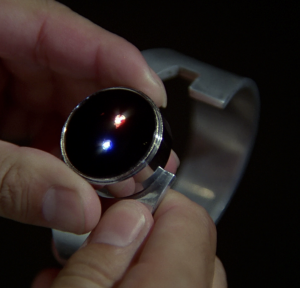 Closeup of the wrist device provisioned to William "Buck" Rogers and Wilma Deering (BR25: "Planet of the Slave Girls").

The contamination detector is a wrist device devised by Dr. Theopolis and constructed by Twiki in 2491 CE.

Aware of the poison from Vistulan food discs, William "Buck" Rogers and Wilma Deering are given these wrist devices prior to their departure to Vistula. Dr. Elias Huer informs them of their use, noting that it will notify them not only to contamination entering their systems but also the dual function of acting like radio directional finders. The finder function works over long distances, allowing Rogers to track Deering into the Sea of Stone after Deering's abduction by Julio from the Governor's Statehouse.