For subjects with a similar name, see: Carl (disambiguation). 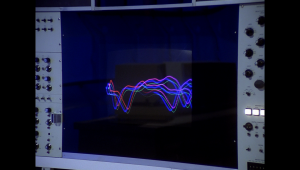 Electronic lines on a monitor change as Carl speaks (BR25: "Planet of the Slave Girls").

How is it possible?
Your question, I presume, is rhetorical, and therefore a waste of my time.
[chuckles] You're just saying that be cause you don't know the answer either. How you hate to admit knowing no more than I do.
I do not.

— Dr. Mallory and Carl discuss the problem of the sickness that has gripped the Defense Directorate's pilots, Buck Rogers in the 25th Century's "Planet of the Slave Girls"

Carl is the Science Directorate's analytical ambuquad working alongside Dr. Mallory in 2491 CE. Carl is known for his haughty disdain and acerbic interactions with humans.

Stella Warren, Kaleel's agent, infiltrates the Science Directorate and becomes assigned as Mallory's assistant. Upon the discovery of the deliberately contaminated food discs originating from Vistula—causing great sickness that debilitates a majority of the Defense Directorate pilot corps—Warren plants a small explosive device that renders Carl inoperative. This prevents Carl from finishing his analysis on the contaminant and how to counteract it, forcing Dr. Elias Huer to dispatch Col. Wilma Deering, Capt. William "Buck" Rogers, and Majors Duke Danton and Fields to Vistula to track the exact source.

Following Warren's treachery, Dr. Theopolis guides Twiki in effecting repairs that rehabilitate Carl, allowing it to complete its analysis for the production of an antidote (BR25: "Planet of the Slave Girls").